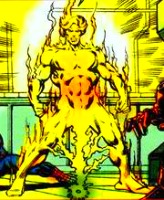 :: Mario’s heart is racked by a thousand anxieties after the scene of the night. He awakens on the night of the fifth day when prime was already ringing as Fr. Ludwig shakes him roughly, warning that the two legations would be meeting shortly and his duties will be complete by its end. Mario looks out of the small cell window and sees nothing. The fog of the previous day is now a milky blanket that totally covers the high plain.
When Mario ventures outside, he sees the abbey as never before. A few of the major buildings—the church, the Aedificium, the chapter house—can be discerned even at a distance, though still vague, shadows among shadows, while the rest of the constructions are visible only at a few paces. Shapes, of things and beasts, seem to rise suddenly from the void; kindred materialize from the mist, first gray, like ghosts, then gradually though not easily recognizable.

Born in a northern clime, Mario is not unfamiliar with that element, which at another moment would have pleasantly reminded him of the plains and the castle of his birth. But this morning, the condition of the air seems painfully kin to the condition of his soul, and the sadness with which he has awakened increases as he slowly approaches the chapter house.
A few feet from the building, he sees Fr. Berro taking his leave of another person, whom Mario does not immediately recognize. Then, as he passes, Mario realizes it is Fr. Malachi. He looks around like a man not wishing to be seen while committing some crime.

He did not recognize Mario as he walks off. Impelled by curiosity, Mario follows Berro, ignoring his dusk responsibilities, and sees that he was glancing through some papers, which perhaps Malachi had delivered to him. At the door of the chapter house, with a gesture, Berro summons the nearby captain of the archers, ghouled to protect the increasingly vulnerable abbey, and murmurs a few words to him. Then he enters as Mario follows him still.
It was the first time Mario has set foot in this place. On the outside it is of modest dimensions and sober design; Mario realizes that it had recently been rebuilt over the remains of a primitive abbatial church, perhaps partly destroyed by fire.

Entering from the outside, you pass beneath a portal in the new fashion, with a pointed arch and no decorations, surmounted by a rose window. However, inside you found yourself in a vestibule, built on the traces of an old narthex. Facing you was another doorway, its arch in the old style, and with a half-moon tympanum wondrously carved. It must have been the doorway of the now vanished church.

The suberbly designed sculptures of the tympanum are equally beautiful but not so disturbing as those of the newer church. Here again, the tympanum is dominated by an enthroned Christ; but at his sides, in various poses and with various objects in their hands, were the twelve apostles, who had received from him the mission to go forth and preach among all peoples. Over Christ’s head, in an arc divided into twelve panels, and under Christ’s feet, in an unbroken procession of figures, the kindred of the world are portrayed, destined to receive the Word. From their dress, appearance, and symbols, Mario can recognize the Brujah, the Cappadocians, the Lasombra, the Toreador, the Tzimisce, the Venture, the Assamites, the Gangrel, the Malkavian, the Nosferatu, the Ravnos, the Setities, and the Trememe. But, along with them, in nine round frames that made an arc above the arc of twelve panels, were the inhabitants of the unknown bloodlines, of whom only the Physiologies and the vague reports of travelers speak slightly. The monks have names for but a few, the Baali, the Lamia, the Salubri, the Telyavelic. The Salubri, each with a single eye the size of a shield, are known to Mario. Several bloodlines appear with dark skin. To think, the Africans could carry the curse. Their bodies all black, defending themselves against the fire of the sun by digging underground caverns. Mario’s thoughts do not linger long on this notion.

These and other wonders are carved on that doorway. But none of them cause uneasiness because they do not signify the evils of this earth or the torments of hell but, rather, bore witness that the Word has reached all the clans world and was extending to the unknown; thus the doorway was a joyous promise of concord, of unity achieved in the word of Christ, splendid acumen.

A good augury, perhaps, for the meeting to take place beyond this threshold, where men who have become one another’s enemy through conflicting interpretations of the Gospel will perhaps succeed today in settling their disputes. Mario reproaches himself, that he is a weak sinner to bewail his personal problems when such important events for the history of Christianity were about to take place. He measures the smallness of his sufferings against the great promise of peace and serenity confirmed in the stone of the tympanum. He thinks to ask God’s forgiveness for his frailty, and crosses the threshold with compulsory serenity. It is what the others do, after all.

The moment Mario enters he sees the members of both legations, complete, facing one another on a series of benches arranged in a hemicycle, the two sides separated by a table where the abbot and Cardinal were sitting. Fr. Ludwig steps between the assembly and Mario, appearing shocked and quite flustered ::

“M-M-Mario! This is no place for you! Improper. Yes, you should attend your duties elsewhere. I-I shall visit with you not until my business is concluded and you have seen to your prayers and studies. Brother Renardo has expressed interest in continuing your studies in the Infirmary. There you will find less to … harm, yes. Now leave our site, childe. Matters of portent are at hand.”

:: As Fr. Ludwig closes the heavy door, unfittingly simple in contrast to the archway, Mario hears the beginning of deliberations. Making out something referring to “Quorundam exigit,” Mario quickly loses hope that anything he can understand will be gathered by eavesdropping. Beginning a sullen walk to the abbey proper, the next words Mario hears shakes him ::

“…because these Nosferatu, who produce heretics as bitches produce puppies, claim everything for themselves, boast of martyrs, but have fine churches, sumptuous vestments, and buy and sell like all the other religious! They brought this down! … Masquerade broken! The Inquisition marches to our doorstep …”
Top

Mario walks toward his duties obediently, and the stables are nearly in sight before he realizes the import of the conversation he had inadvertently stumbled upon. Fear pulled at his cold heart, and warred with fierce pride. The inquisition was coming with fire and sword to torture them all... But was he not stronger now? He was not a peasant to be threatened, the potence of his limbs and the fortitude of his immutable form was more than a match for them now. Wasn't it?

Doubts bubbled to the surface as he remembered the frantic overheard words. Enough men, men bearing fire in the daylight hours, could turn them all to ash while they were powerless. Mario walked into the stables, the smell of day old blood mixed with horse manure enticing his thoughts away and reminding him of his shame. He could not clean the stables, not today.

"I must speak to someone, someone who might understand... Where is Abelio? Or maybe even Felix? I cannot keep this to myself..."

With whispered words to bolster his confidence, and settle his next course of action, Mario made haste to find either Abelio or Felix.
Threading the Gerbil since 1982